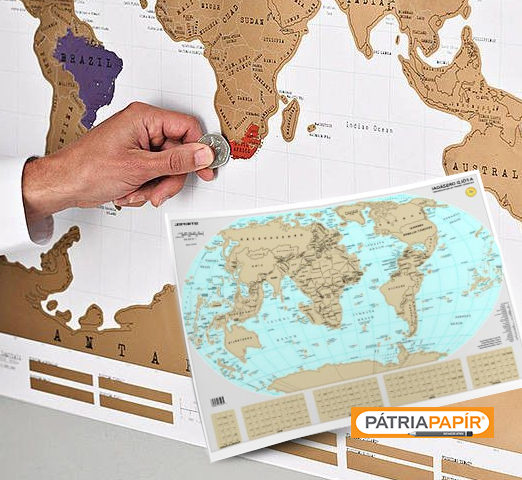 The special scratch world mapis now also available in Hungary. This map, which is decorative by itself, may be used to show family trips but in business life as well. Mark your favourite holidays, but you can also keep track of the international expansion of our company. It’s a great gift for globetrotters who would like to see where they still need to go based on their bucket list.

In addition, it can be a great complement to learning, as it teaches students about the animals of the Earth in an exciting way. You can easily identify country borders, oceans, seas and islands. It’s a really funny and entertaining distraction for the whole family.

The map is delivered in a solid cylinder, which makes storage easier, but also allows us to take it with us for a big adventure.

But how did maps become common?

Man first learned to draw and then to write. The notes of the first routes, mountains, and water sources remained in a drawn form for posterity. They served not only the purpose of information but also helped the first cavemen in communication and social co-operation.

It has been a controversial topic what we can regard as the oldest map. In Jena, there is a vase on which the town of Nippur can be identified. The 21×18 cm, nearly 3500-year-old artwork depicts the ancient Sumerian capital city.

Maps were found on papyrus rolls as well. The first one was made in the time of Egyptian Pharaoh Seti I. This shows Hammamata’s gold mine and the place of occurrence of the Nibai-bekhen rock and the pathway leading there, which have helped scientists greatly to explore the finds.

In Ancient Greece, Claudius Ptolemy was one of the most important cartographers who was the first to capture a part of the Earth on a flat surface. This was the predecessor of what we are using today. He contributed to putting the name “North” onto the maps and helped to draw the geometric coordinate system.

The Romans also recognised the usefulness of maps, but they focused on drawing town roads and routes. This was called itinerarium in Latin.

More and more maps were put on the walls and gradually the world map, as we know it today, emerged. Now you can plunge into a discovery of the world with the help of our map posters.